The best dinosaur games for PC in 2022

Looking for a list of the best dinosaur games on PC in 2022? Whether you’re looking to hunt the Mesozoic monsters or want to stomp and chomp humans while playing as them, the appeal of dinosaurs in gaming is endless.

What is not endless, however, is the number of dino games that successfully realise that fantasy. Let’s be honest: until recently, fans of dinosaurs and big guns haven’t exactly walked the primrose path, even on PC. It’s been a long hard road, marked by velociraptors that look like lumpy dogs, rifles that feel as satisfying as lobbing a bullet by hand, and jeeps that seem to magnetically roll themselves into a nearby ditch, no matter what keys you press.

Still, the undeniable lure of blasting a T-Rex in the face with a grenade launcher continues to resonate with a great portion of the gaming public, and while few triple-A developers have proffered quality dino games, there are a few ambitious indie dinosaur games that fill the gap in the market. If dino thrills are what you’re looking for, here are the best dinosaur games on PC.

The best dinosaur games on PC are: 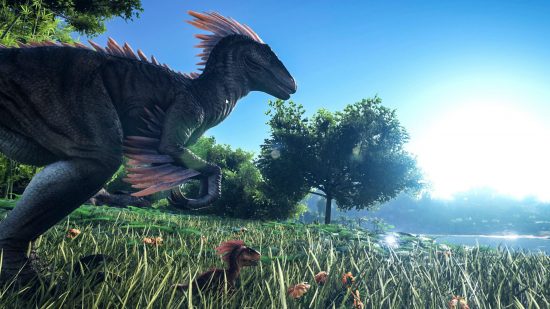 As the subtitle in its name implies, Ark belongs to the list of dinosaur survival games, which means the dino murdering can only commence after crafting your own spear to chuck at those pesky raptors. The shooting isn’t the tightest, and there are still plenty of bugs even years after its initial launch, but the sheer range of creatures to fight, hunt, and tame in Ark will keep you exploring the game’s many biomes for hundreds of hours.

After learning their quirks, you can even ride and tame Ark dinosaurs and use them to help you survive in the world, whether as simple mounts so you can get around faster, or as resource-gatherers, freight carriers, and loyal foot soldiers. On top of that, there are also plenty of Ark: Survival Evolved mods to pick from. 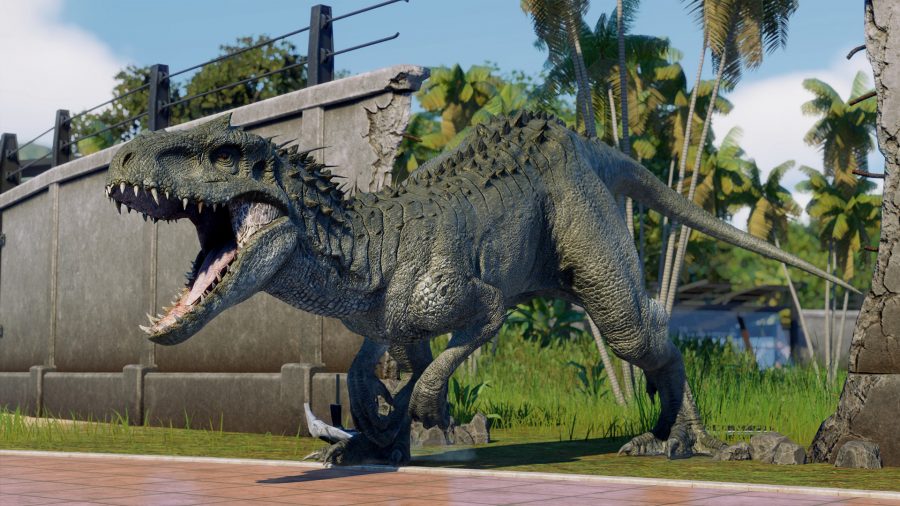 While most PC dinosaur games concern themselves with hunting dinos, Frontier Developments has instead opted to create the opposite with the Jurassic World Evolution games: dino ranching. Rather than mowing down rare creatures with a minigun, you try to build a Jurassic Park that doesn’t fall apart before its first day. Naturally, the whole enterprise is prone to all manner of disasters.

Jurassic World Evolution 2 adds plenty more management tools, and a host of new dinosaurs with more complex behaviours and needs. In Chaos Theory mode, you get to test your crisis-handling chops in scenarios directly inspired by the films, as you’re handed the reins to parks on the brink of calamity. For a full report from corporate, check out Rich’s Jurassic World Evolution 2 review. 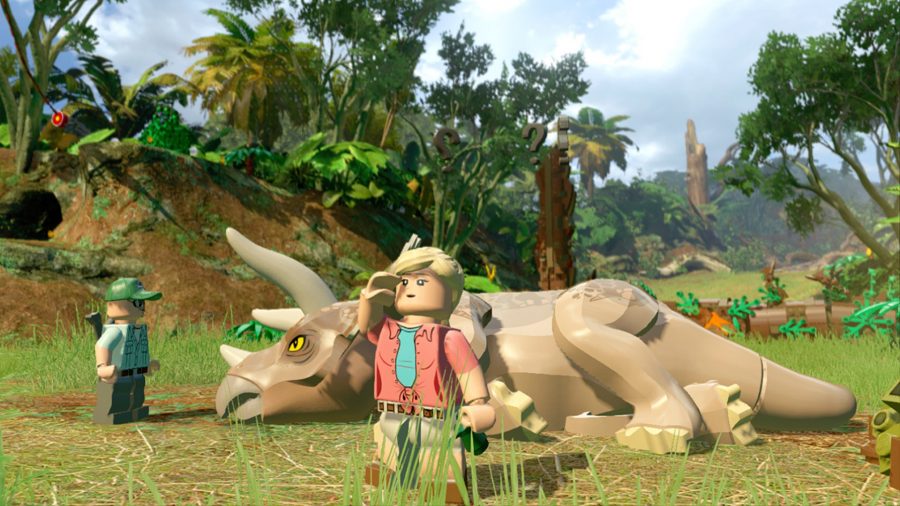 The real treat here is that the Lego games are among the best co-op games available, making this a great dinosaur game to play with friends and family. There’s not a huge amount that separates this Lego game from others – apart from the setting – but you can play as a huge number of different dinosaurs, which is a lot of fun. 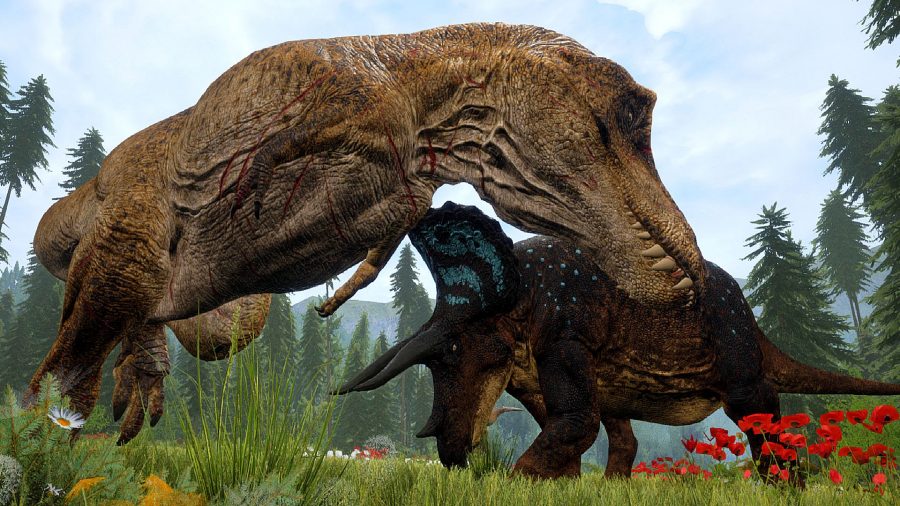 The Isle is a multiplayer dinosaur survival simulation game that’s still a long way off leaving Steam Early Access, but there’s nothing else quite like it on PC. The gameplay is pretty simple, you load into a server full of dinos that are all being played by other people, and attempt to survive in the world by preying on smaller dinosaurs and avoiding predators at all costs.

Where The Isle really gets interesting, however, is when players start forming packs and groups in a server, leading to player-controlled herds, nests for growing your group, and inevitably massive dino battles. 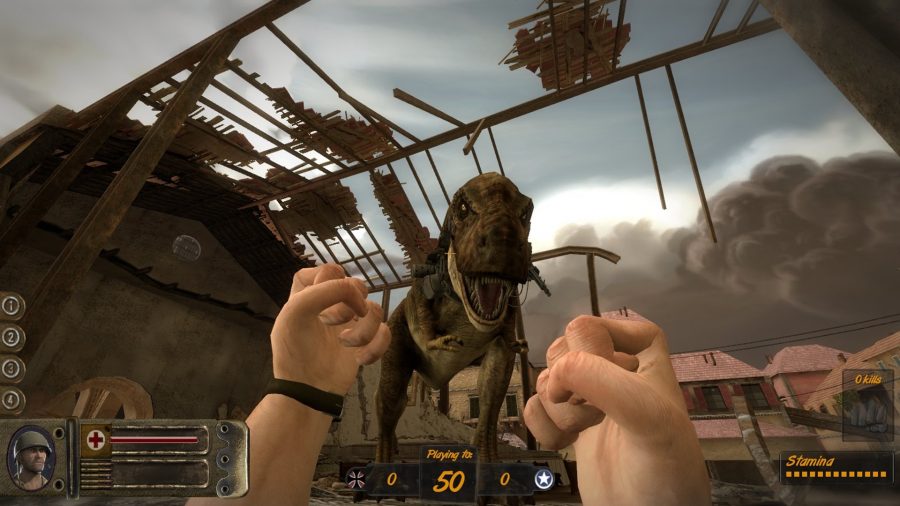 The best multiplayer games with shooter elements can be pretty stodgy, humourless affairs, especially when it comes to those that strive to be period-accurate. Dino D-Day is a refreshing alternative to the traditional WWII shooter, mixing the semi-tactical gunplay of Day of Defeat with the ferocious claws and talons that only dinosaurs can supply.

While it sounds like a joke game in the vein of Blood and Bacon, it’s actually a surprisingly creative class-based shooter with some truly wild ideas, like a tiny dino that boosts the power of its explosive payload by swiping at your ankles, or a raptor that can pin down single targets and take them out in just a few swipes, just like Left 4 Dead’s Hunter.

Unfortunately, D-Day is nearly a decade old and its player count has dwindled considerably. Still, if you can convince some friends to get it on a sale, this is a great palate cleanser. 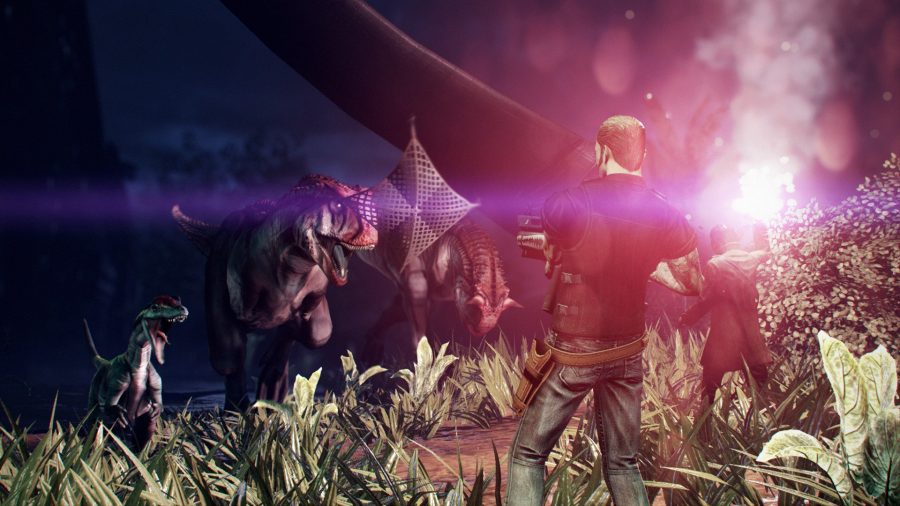 Dinosaur-hunting games are all about the battle between man vs. beast, and that’s exactly what you get with Primal Carnage. On one side, you have hunters in sunglasses toting big guns; on the other, you have giant reptiles ready to rumble.

While there are people who go in deep for the roleplay servers, Primal Carnage is at its best when both sides are just throwing everything they have at each other, resulting in a stupid, irresistible melee. Any game where you can play as a pterodactyl, swoop down, pick up a guy, and drop them to their death is worth checking out. Along with Dino D-Day, this is a multiplayer game that lacks player population, so you’ll probably need a few friends if you want to guarantee yourself a game. 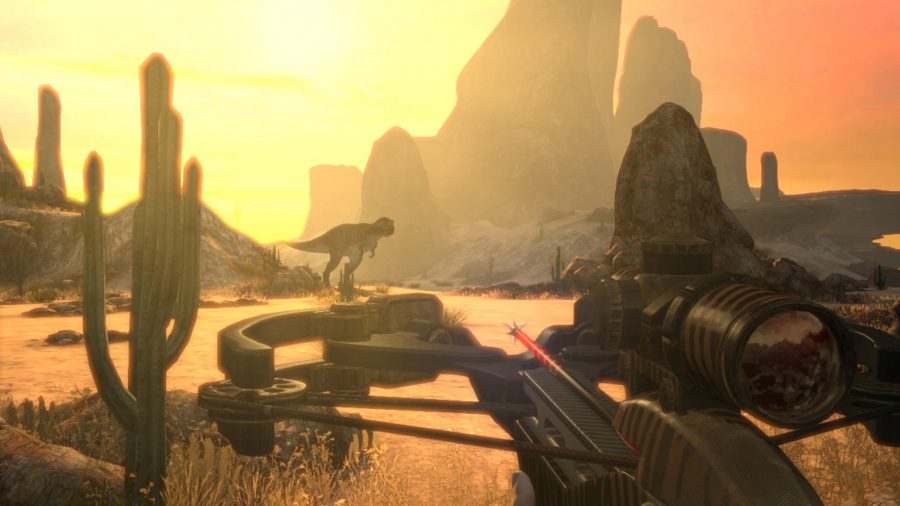 If you’re looking for a triceratops-toppling experience that’s a little closer to traditional hunting sims than the likes of Turok, this is your best bet. This remake of a beloved series from the late ‘90s focuses on tracking, hunting, and killing a variety of dinos.

You have to sneak up on these big boys and hold your breath to get accurate shots, and the size and condition of each target determine what rewards you get for a clean kill. It’s a bit light on content, but if you’re tired of hunting down deer, boar, and other harmless woodland critters then this could be the change of scenery you need. 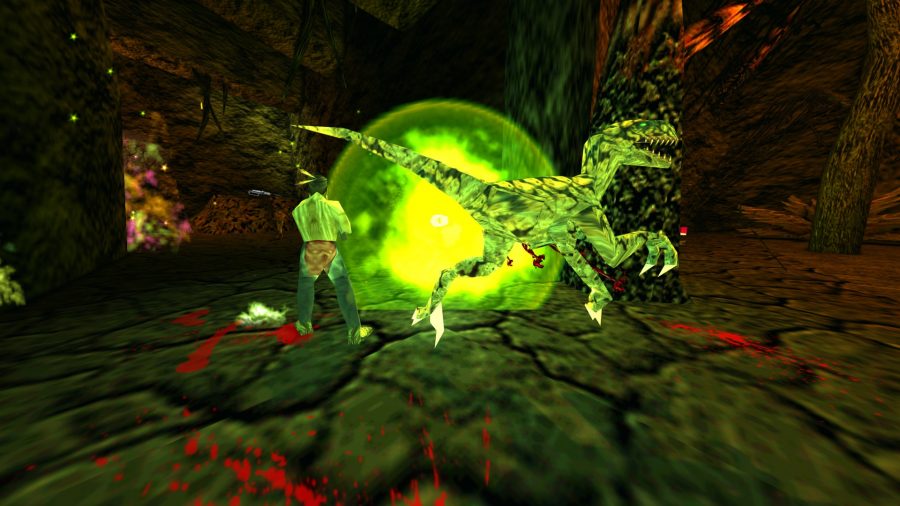 Speaking of Turok, it might be hard to believe now, but before the one-two punch of Gears of War and Call of Duty 4 tethered the blockbuster shooter to beige reality, the genre had its fair share of colourful contenders. The first Turok in particular is a relic of the Quake era, packed with weapons that spin in mid-air, your dinosaur hunter’s frantic footspeed, and endless canyons of baddies to blast through, but it offers some of the best dino-slaughter of its era.

Turok 2: Seeds of Evil is an altogether more sophisticated game, with an emphasis on non-linear labyrinths rather than the traditional corridor crawls of other shooters of the era. However, it’s probably best-known today for its creative weaponry, especially the fearsome Cerebral Bore, which performs exactly the gory deed it says on the tin. Overall, these aren’t the best old games out there, but they’re fondly remembered for a reason, and they let you wreck some giant reptilians, so they’re perfect for this list. 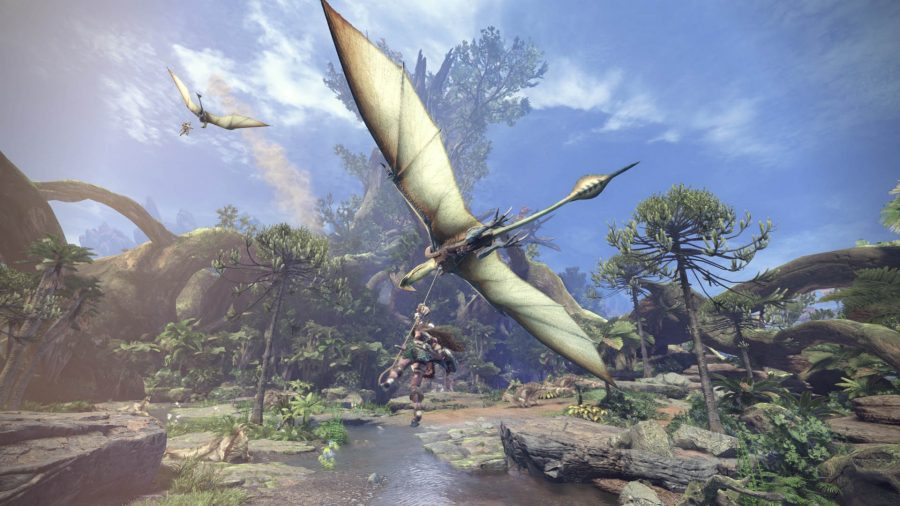 Sure, so they’re not technically dinosaurs, but it’s hard to deny that the Apceros or Anjanath are based on real dinosaurs, even if some of the bigger beasts in the game aren’t. In case you’ve let the series pass you by, Monster Hunter: World is pretty much what it says on the tin: you play a monster hunter, and you have a whole world teeming with fantastical creatures to identify, track, and bring down in cinematic boss battles. Once you’ve secured a kill you can strip the carcass for resources, take them back to your camp, and craft tougher weapons and armour that will let you take on even bigger beasties.

Aside from the seductive power creep, Monster Hunter: World also boasts some of the best action-RPG combat around. There’s a huge range of weapon types, from standard sword and shield combos to more eccentric tools like the gunlance, and learning the movesets of each one promises to be a steep difficulty curve. If you’re willing to put in the time – and we can help you a little with our Monster Hunter: World weapons guide – then this is probably the best dinosaur hunting game out there, even if some of its dinos have wings and breathe fire.

And the series is transitioning to PC more consistently now, so you can also try out Monster Hunter Rise and Monster Hunter Stories if you find yourself falling for these dino-inspired monsties. 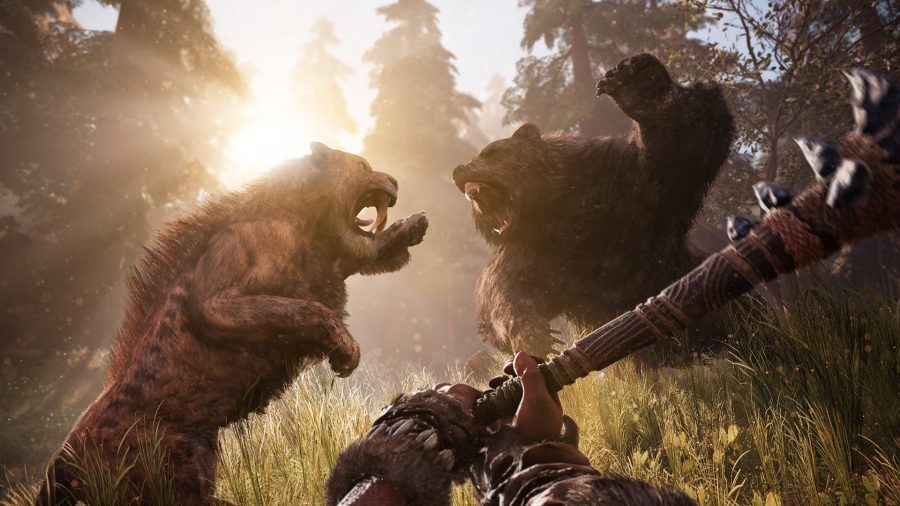 Yes, for all you amateur archaeologists cracking your knuckles to type a lengthy comment out there, we know that Primal is set in the Mesolithic era, millions of years after the dinosaurs were wiped out by a cataclysmic event. However, if you’re a fan of dinosaurs then woolly rhinos, mammoths, and formidable cave bears are the next best thing, and Far Cry Primal has the lot.

Primal lets you hunt all of these creatures and tame some of them as well so you can send them charging into battle on your behalf. And if you find yourself tiring of all the mammalian slaughter then this is still one of the best open-world games around, and there are plenty of distractions and hidden quests to discover along the way. It’s not the best Far Cry, but it captures the feeling of prehistory better than most games. 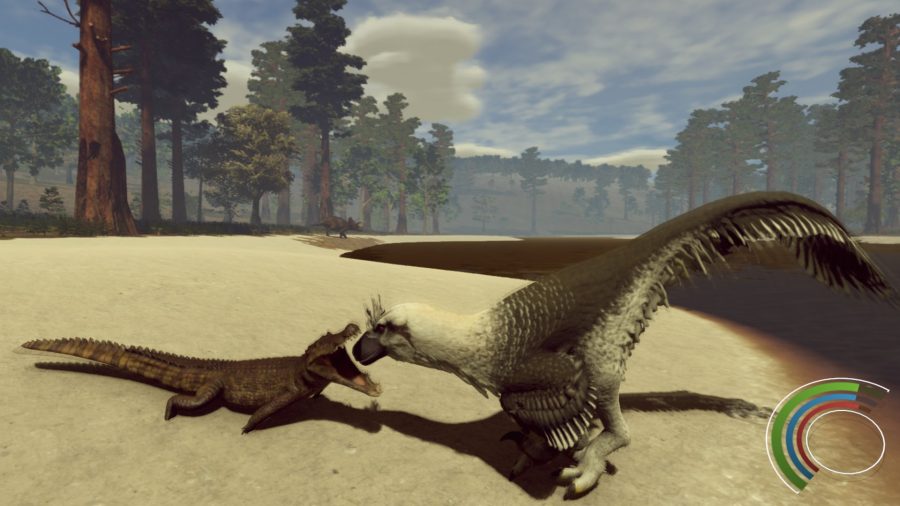 This is a dino simulator with a difference – you hatch as a baby ‘saur and must survive into adulthood, avoiding predators and scrounging for food every day. There’s a huge amount of attention to detail going on here, with great effort to ensure Saurian’s flora and fauna are as historically and scientifically accurate as possible – and yes, that means dinosaurs with feathers.

You’re currently limited to playing as a Dakotaraptor with a fabulous feathery tail, or the newly-released Triceratops, but both are incredibly realistic. Time to find out if you’d be able to make it as a dino back in the day, and survive the many challenges of Hell Creek. 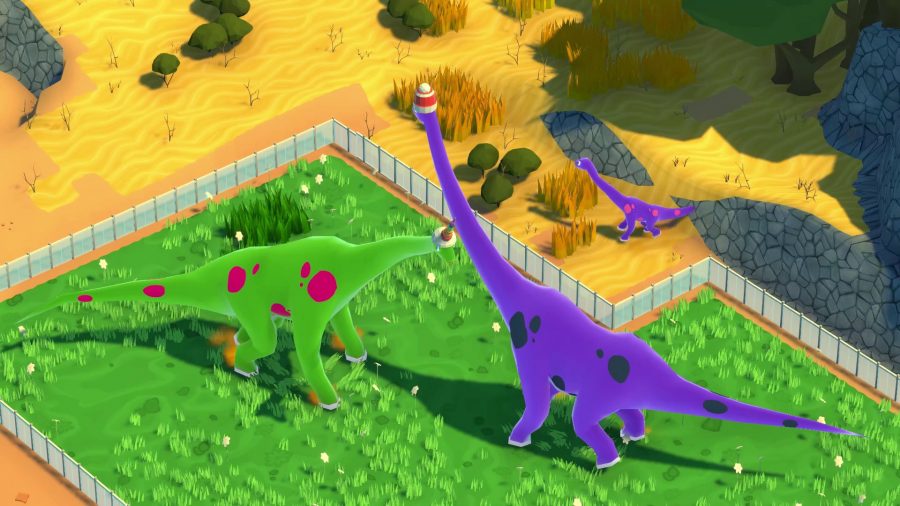 No hunting, shooting, or wrestling with dinosaurs here – instead, we’re going to put them in an adorable, brightly-coloured theme park, pop a propeller cap and pair of shutter shades on their scaly little heads, and watch the money roll in. What’s that? The unfeasibly purple T-Rex with the woolly hat has a visitor in his mouth? Oh dear. Oh look, they’re also on fire. Ah well.

Parkasaurus is a charming dino park management game, where your job is to keep your dinos and guests happy and puncture-wound free. While the concept is similar to Jurassic Park Evolution, the execution couldn’t be more different. The game’s shiny, low-poly style, user friendly interface, and an array of silly hats set it apart from the more, er, realistic dinosaur games on this list, but with over 24 dinos to discover and care for, it’s a must for dino lovers looking for a chill game to wind down with after a long day of chomping and stomping their way through the Mesozoic era. 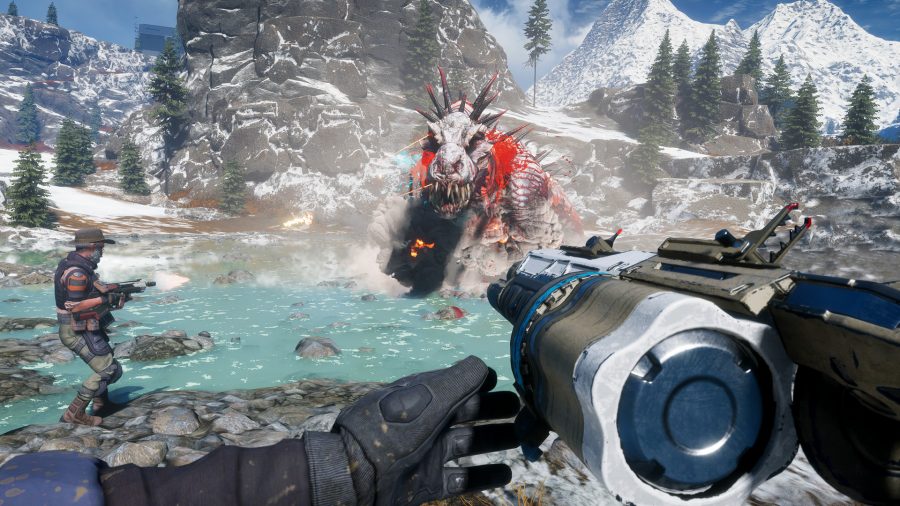 Second Extinction is an online FPS game that’s now available on Steam. As mutated dinosaurs – such as the Electro Raptor – attempt to take over earth, you are tasked with sending them back to where they belong. It’s hard to say whether this game is for dinosaur lovers or haters, but if you want to traverse huge maps, shoot big guns, and hunt some majestic creatures – Second Extinction is the game for you.

That’s your lot, the very best dinosaur games on PC. If you’re looking to dig up more classic-feeling greats then check out our list of the best retro games. In the meantime, we’ll be quietly waiting for more triple-A studios to realise how much better their games would be with the odd dino sprinkled in.