While the physical aspect – slaps included – may be absent, browser-based board games are still a great way to get your favourites to the (virtual) table more often. Handily, they also come without the pesky need to host other folks in your home, so you can save on snacks, drinks, and the effort of tidying up after. On top of that, the best online board games are also much faster to set up and you can play with AI if you’re a mate or two down. In case you’re not all that fussed about using browser-based clients and are just looking for some of the best PC board games on Steam, then we have a separate list for those.

If you’re keen to give them a try, we’ve rounded up the best online board games below so that you can get your analogue fix in the digital world.

Best online board games to play with friends

Here are the best online board games: 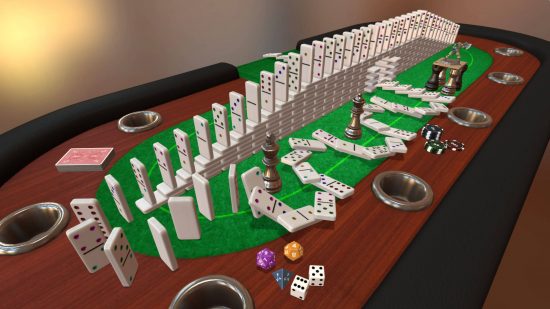 Like a decidedly limp monkey’s paw of board game wishes, Tabletop Simulator (TTS) can conjure up almost any box you can think of. The price? Some slightly janky controls and awkward implementation.

TTS is a glorious thing on the face of it: an engine packed to the brim with fan-made and official mods of all your favourite releases. As a simulator, players can manually move components and cards about on a virtual table. In practice, doing so can often feel like swinging a dead cat across your screen. There are myriad tiny controls to learn, and it’s not uncommon for players to accidentally hurl parts into the sky, or even flip the table entirely (there’s a key dedicated solely to this helpful action). That’s right, it even simulates a bruised ego.

The quality of mods also varies drastically. Some will automate almost everything for you; others simply dump the necessary pieces on the table and leave you to it. As such, we’d advise opting for board games that one or two of your group already know the rules to. Once you do get to grips with its peculiarities, Tabletop Simulator is by far the closest thing to actually sharing a table with your friends. Our recommendations? The Clank! and Point Salad mods are well worth a look. 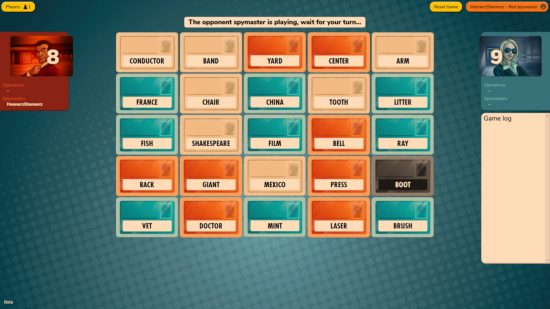 Vlaada Chvátil’s Codenames sees two teams face off over a grid of words. Only each team’s spymaster knows which words are the ones their team needs to pick to win. Delivering single-word clues and a number of associations, the spymasters must guide their collective of morons to pick correctly. Connecting clues is hard enough, but it’s just as vital to avoid linking in opponent and neutral options, or the dreaded, game-ending Assassin card.

The premise is phenomenally simple, and players barely need to interact with the board while playing. This makes it an ideal convert for online sessions, a strength the publishers quickly cottoned on to. As such, there’s an entirely free, browser-based version available. All you need to do is have one player create a room, and then share the generated URL with anyone who wants to join.

Unless you’re throwing a video call into the mix, the spymaster won’t have to worry about maintaining a poker face. Mute your mic, and you can scream as many obscenities as you want while your team gleefully abandons the good ship sensibility to discuss the unrelated assassin card for the fifth time. Online Codenames also permits rival spymasters to wallow in despair together, trading chat messages about just how foolish their teams are. They might be your enemy, but at least they understand what you’re going through. 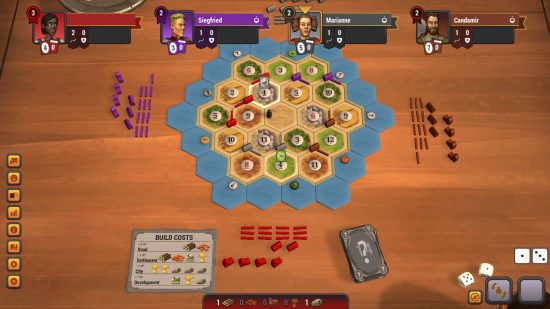 Based on one of the most popular gateway board games of all time, Catan Universe is a faithful recreation of Settlers of Catan. It’s a resource-trading game where you must build roads connecting to settlements to get victory points. The more settlements you make next to resources, the more likely you’ll be able to expand further across the island in the following turn.

It’s a cutthroat game that’s easier to grasp than even the likes of the ultra-capitalism simulator that is Monopoly. You can try out some of the base game scenarios for free to see if you like how it plays. Purchasing the base game won’t burn much of a hole in your pocket and if you dig it, plenty of expansions and a few spinoff games are available. 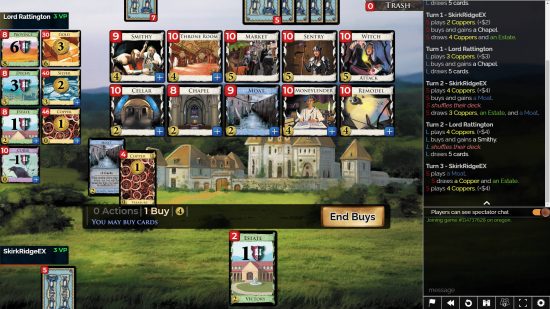 Dominion is one of the most popular deck-building games on the market, and it has players buy cards with money, which all get shuffled into their decks. Over time, the aim is to create a deck that has synergy with itself, maximising the number of victory points you can claim at the end of the game while also ensuring you’re not out of pocket for those vital upgrades.

All the while, your opponents will be doing everything they can to foil your plans, whether it’s buying up all of the most valuable settlements that grant victory points or all of the card draw and actions you need to filter your deck of trash cards. The base set of cards is free to play, but you must purchase a monthly subscription to access the expansions. Simpler cards are offered at a lower price, though the entire list isn’t exactly expensive if you plan on playing the game a lot. 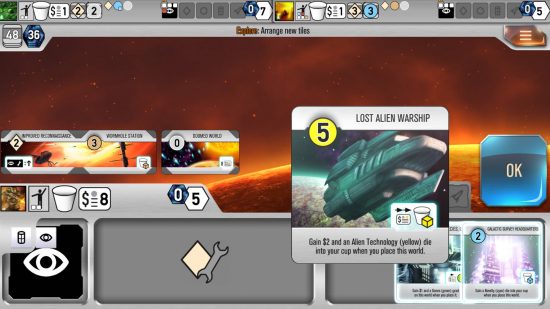 Roll for the Galaxy

There aren’t many space games that’ll let you dominate the stars with an intergalactic disco. Then again, Roll for the Galaxy isn’t your usual space-conquering affair. Rather than fighting directly, players secretly roll and assign dice to tasks like settling worlds, generating money, producing goods, and shipping valuable wares for victory points. Each new world grants further powers and dice, allowing you to build up a powerful production engine throughout the game.

Roll for the Galaxy is an undeniably great game, hidden under an icon-based UI that can confuse newcomers. The app automates a lot to make the experience cleaner, but expect new players to be a little lost at first. So long as you spend some time familiarizing yourself with the rules, you’ll be fine.

The digital release of Roll for the Galaxy has only just hit the Steam store, making it one of the more polished online board games. Matches can be played in one sitting, or dropped in and out of over several days or even weeks. A rules reference is easily available at all times, and you can practice your skills against a surprisingly competent range of AI difficulties. 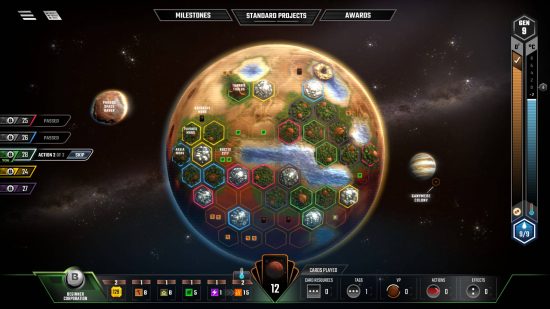 Red Alert may have taught us that space has yet to be corrupted by capitalism, but the Red Planet has other ideas. In Terraforming Mars, rival corporations have swarmed Earth’s next-door neighbour in a race to create a habitable environment. Developing projects, players establish outposts on the surface and advance life support systems to prove their company’s prowess to rich investors back on Earth.

Regarded as one of board gaming’s greats, Terraforming Mars is also infamously ugly. The digital app manages to morph the eyesores of the boxed version into a more palatable presence for your peepers, though it’s still far from the prettiest offering on the market. Taking a digital holiday to Mars will also allow you to add AI to matches and try out some extra modes and features that never made it to the physical release.

There’s a reason Terraforming Mars is regarded as one of the all-time board gaming greats. If the Steam version enables more chances for your gaming circle to sit down with this gem, it’s an all-but-essential addition to your digital shelf space. 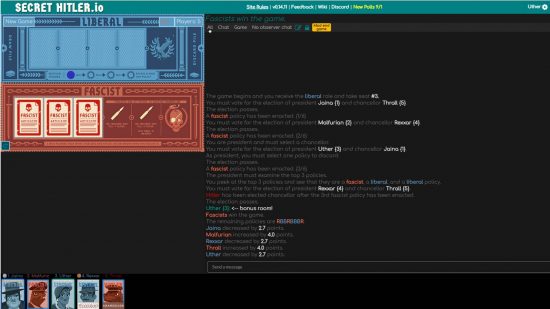 Time to find out if any of your friends are disturbingly good at tricking each other – Secret Hitler, the incredibly popular social deduction game, is now playable online. Players separate into fascists and liberals, and the evilest among you (determined by a secret, mysteriously accurate algorithm) will be assigned the role of the Secret Hitler. Nasty old Hitler doesn’t know who their teammates are, but the fascists can win by passing six fascist policies or getting Hitler elected chancellor after passing three. The good guys must pass five liberal policies to win – or shoot Hitler in the head, to everyone’s delight.

Each round, a player will take their turn to be president and propose electing a chancellor. If their proposal passes the popular vote, the president draws three policy cards and selects two to pass on to the chancellor – who then chooses which one to enact. The moment a red fascist card pops onto the table, the chat erupts into wild accusations – “I sent you a red and a blue!” “He sent me two reds!” But probably with more swearing. “I sent you one of each, you lying sack of doodoo.” That’s more like it. 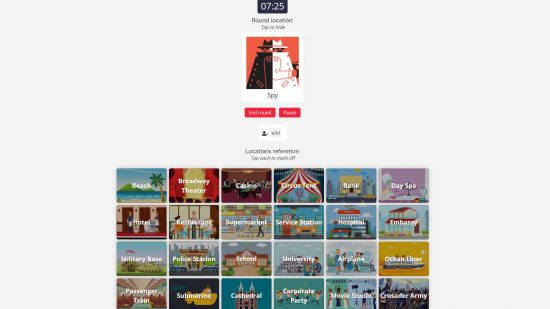 Speaking of social deduction games that are rather good, here’s one that you can play with some friends over a Zoom call. Spyfall is another hidden role game, but one that feels different from many others on this list. One player is the spy, while the rest of the group are normal people. Every normal person is given the same location from a large selection. However, the spy doesn’t know where they are and must work it out.

Every game has players ask each other questions about the place that they are located in until time runs out. If the normal people guess who the spy is, the spy can still win the game by guessing the location of the rest of the group.

And that’s the beauty of Spyfall. Ask too obvious a question, and the spy may get clues about where the rest of the group is located. Ask too cryptic a question, and you may accidentally implicate that your teammate is the spy.  It’s also easy to explain, and you can all play across multiple games in one Zoom session without getting too bored.